On Wednesday, July 6, I woke up to news online — where I get my news — that Chelsea Manning reportedly attempted to take her own life and was in the hospital (the attempt being unsuccessful). Subsequently I learned that her attorneys’ scheduled call on Tuesday morning had not happened, and they were unable to reach her, and were not getting any reasonable explanation from the Army.

As part of my work with the Center for Conscience in Action, as well as with Amnesty OKC, I keep close tabs on the Manning case.  In 2013, I attended a couple of days of her court martial. I have written to Chelsea several times, and have received return correspondence. So, I was very alarmed and concerned, but no further news was forthcoming for days. So we all just waited for the U.S. military to do the right thing — not something you should hold your breath for.

Initially told that they could speak with Chelsea on Friday, the legal team was put off again. They put out a statement:

The prison has notified us that Chelsea was hospitalized and remains under a doctor’s care. At this time her doctors are recommending against a call and we are respecting those recommendations but are in close touch with the facility and will continue to monitor her condition and hope to connect with her soon. To protect her privacy, that is all we can say at the moment. Please continue to send Chelsea your good thoughts and messages of support.

… so we basically just had to wait and worry, not really knowing if the leaked info about a suicide attempt was even true. Finally, on Monday afternoon, word came that the lawyers spoke with Chelsea and we got a little reliable news about what had happened, though it prompted as many questions for me as it answered:

“After not connecting with Chelsea for over a week, we were relieved to speak with her this morning. Though she would have preferred to keep her private medical information private, and instead focus on her recovery, the government’s gross breach of confidentiality in disclosing her personal health information to the media has created the very real concern that they may continue their unauthorized release of information about her publicly without warning. Due to these circumstances, Chelsea Manning requested that we communicate with the media and her friends and supporters on her behalf.

“Last week, Chelsea made a decision to end her life. Her attempt to take her own life was unsuccessful. She knows that people have questions about how she is doing and she wants everyone to know that she remains under close observation by the prison and expects to remain on this status for the next several weeks. For us, hearing Chelsea’s voice after learning that she had attempted to take her life last week was incredibly emotional. She is someone who has fought so hard for so many issues we care about and we are honored to fight for her freedom and medical care.”

And that evening, Chelsea tweeted a message (through a proxy, as I understand it):

I am okay. I’m glad to be alive. Thank you all for your love <3 I will get through this. #standwithchelsea

So, immediate concerns for her health being somewhat ameliorated, now we address the horrendous violation of her privacy by the leaking of her medical situation by someone at Fort Leavenworth.

Now, I’m sure that some will say, well, she (they would probably say “he”) leaked private info, so now she knows how it feels. “What goes around…” But I would remind anyone with that point of view, that Chelsea has been severely punished for that, and therefore if you want to use that analogy, let the leaker come forth or be exposed and take a similar fate.

In fact, Chelsea is serving an unprecedented lengthy prison sentence — 35 years, of which six (counting from initial arrest) have been served — so if her appeal of the sentence is not successful, she faces three more decades in military prison. She would be 58 on release.

She has had to fight tooth and nail for every shred of dignity the fucking Army has given her, not even counting the torture and mental abuse inflicted before the trial and conviction — they refused until forced by the courts to use her female name, even after it was legally official; they refused until forced by the courts to give her the standard medical treatment (hormone therapy) for her gender disphoria — which the Army doctors diagnosed; they torment her and threaten solitary confinement for ridiculous infractions like having a copy of Vanity Fair magazine, and a tube of toothpaste past its expiration date; and, to this day, they refuse to let her grow her hair and groom herself as a woman (which she is, and thanks to the hormone therapy, is otherwise exhibiting physically).

Parenthetically, it is certainly to be hoped that the new military policy on transgender service will apply to Chelsea and allow her to transition with dignity.

An innately curious and keenly intelligent person, she must live an extremely constrained life in which she has almost no control over anything that befalls her. And she has this grey, bleak — yet highly stressful existence — to look forward to for 29 more years, or, at best, some unknown lesser length of time.

So, she has plenty to be fucking depressed about, and has precious little reason to be invested in a future vision for herself. Having received letters from her, and seen how she tries so hard to keep her hopes up, and be sustained by the worldwide support she receives (and for those who don’t know, her case is exponentially better known outside of the U.S. than in it, which is a awful indictment of us here, frankly), I marvel at the upbeat approach she so often seems to have. But it’s a fragile stand, at best, and I base that on my own past experience with severe clinical depression. Events, pieces of news, a thoughtless word or some random coincidence of fate even, can plummet one into existential despair.

Now this is speculation on my part, and I’m not pretending to have any special insight into Chelsea’s thinking, or even her access to breaking news, but I think it’s possible that last week’s crisis was at least partly sparked by the news a couple of days before that Hillary Clinton would not be indicted for sending classified documents over unsecured email accounts while Secretary of State. Chelsea would not have been the first to notice the lack of consistency. But again, I have no information on the matter other than what has been released publicly to date.

But regardless of what happened to cause Chelsea to momentarily suspend hope, she now says, per the tweet above, that she is “happy to be alive.” This is not false emotion, but a typical response to this situation, and yet, it also confirms the fragility of her state, I believe ( I am not a doctor).

It is therefore more imperative than ever that those of us who support what she did, and support her personally, do more for her. I think the most important thing we can do is to write her — long chatty letters or a cute card with a quick note, but do it more often. Let her know what you are doing in your community to spread awareness and support for her case, especially the appeal, which was filed earlier this year. Let her know that she matters, that we have her back, and need her around.

Here is the address where you can write Chelsea. Note that you must write out the address exactly as shown here. Don’t even abbreviate “Road.”

If you would also sign this petition, at the top of this page, or find it here, that would help us to address the most current breach of Chelsea’s rights and dignity, the unauthorized leak release of medical info.

For more details about what you can and can’t send Chelsea, see this page.

To learn the background of the case, and follow news about her, a good place to start is at the website of the Chelsea Manning Support Network.

She blogs at Medium.

She has a column in The Guardian

You can donate to her support or legal appeal here.

If any group in Oklahoma or nearby states would like to have me come and speak about the case, I would be happy to do so. Use the contact form on this site, or through CCA.

Finally, if you are in the central Oklahoma area on Dec. 17, 2016, join us for the 5th annual birthday party for Chelsea in her hometown of Crescent, OK (just a few miles north of OKC). This annual event is sponsored by the Center for Conscience in Action and Amnesty OKC.

Some year, soon we hope, Chelsea will be able to attend her own party. Until then we all wait, and do what we can, with no control in the matter except our own state of mind.

Chelsea most of all. 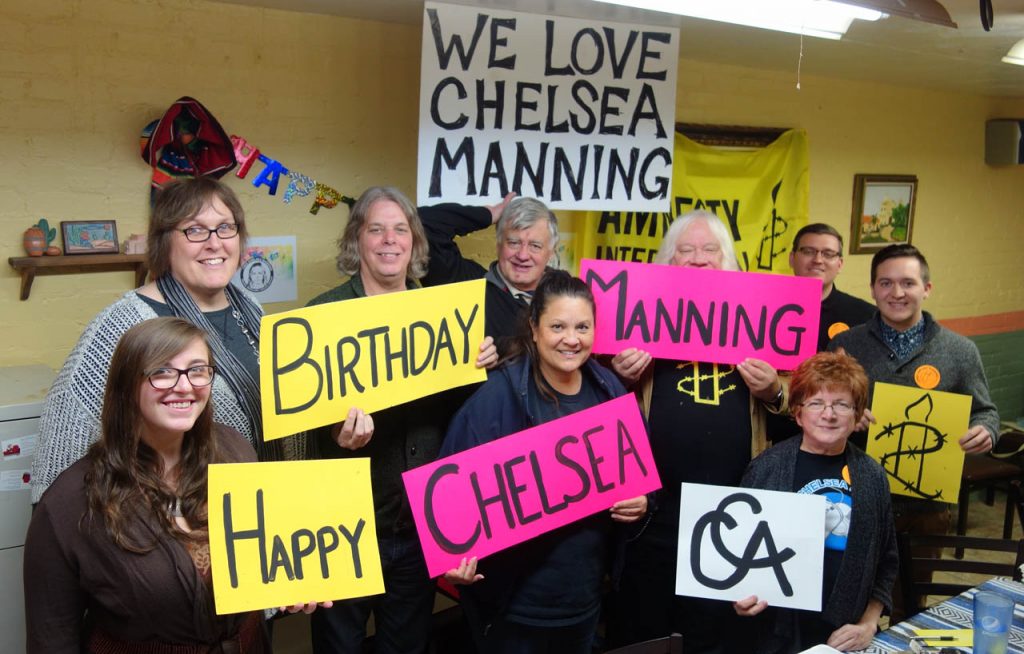