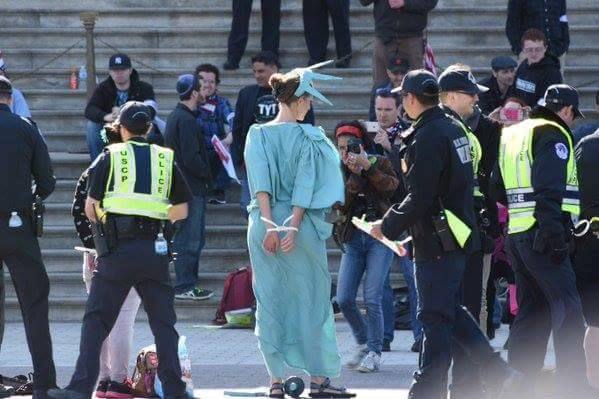 I am a patriot
and I love my country — because of its ideals, as codified by the Constitution, not because of its past failures to live up to those ideals, or its economic position in the world, or its bullying use of its military and corporate power. I will not hesitate to criticize and resist when its policies and actions are morally wrong and ultimately jeopardize the integrity and safety of its people, or any others who mean or do us no harm.

Humanist, feminist, death penalty abolitionist, human rights advocate, and democratic socialist, are some of the labels I identify with. But labels are just tools for efficient categorization, limited in describing complex people. I am an atheist who works closely with progressive people of faith, a gregarious nerd, and a very angry pacifist. I am a survivor of childhood trauma that impairs my functionality despite years of therapy and a long passage of time. I was exposed to different cultures growing up in many locales, read widely, and observed a major cultural shift in my formative years, so now I am intolerant of bigotry, impatient with stasis, anticipatory of social advancement. On the other hand, I love my predictable daily schedule and get grumpy when it’s interrupted. My heroes are those who stand up for others, who brave social rejection to do what’s right, whose lodestar is what serves the common good and assures the individual’s rights. Who take action for justice, who give voice to human struggles or who overcome their limitations to give to others.

“There is no flag large enough to cover the shame of killing innocent people.”

“When will our consciences grow so tender that we will act to prevent human misery rather than avenge it?”

“Stand up for what you believe in, even if you are standing alone.”

PeaceArena.org blog and connected platforms and accounts is owned and operated by Serena Blaiz, the nom de Net of a longtime progressive political activist and communications professional. If you meet me in person I will be happy to tell you my real name, I’m just paranoid about it being plastered all over the internet. Someday I’ll post about my complicated feelings about names; in the meantime, I’m just Rena (thus “Peace Arena“), which summons me in both worlds.

I am a feminist, humanist and collectivist, working at the grassroots level for peace and justice, previously in Florida, and since 2003 in Oklahoma. Sometimes I get paid for this work, though quite often I do it out of a desire to seek justice and build community.

I consider myself an ardent patriot, but my allegiance is not to a flag, a president, a party or a state, but to the U.S. Constitution and the ideas of liberty, human rights and freedom that it embodies; as well as to other philosophies and documents that address the rights and dignity of all living creatures.

This blog will cover politics, grassroots and electoral; media and its reform; social issues; culture; with some history and science thrown in, since these topics interest me. Since I am involved in community organizing, and currently find myself in central Oklahoma, I’ll be posting about grassroots peace and justice work with which I am involved or concerned.

I am not a typical Oklahoman, and do not pretend or seek to speak for all Oklahomans, or even anyone other than myself. My views are further left than most of the country, and certainly different than the vast majority of Oklahomans.

But I do seek to widen the discussion about politics, in the widest sense of the word, in this state, both on this site and on others that I contribute to. I know from living in many places and cultures that Oklahoma citizens are not being well served by its traditional media sources.

My primary goals for this site are to