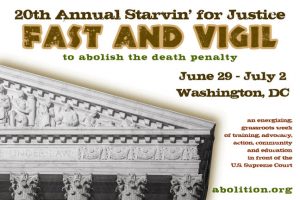 My fellow abolitionist and Amnesty SDPAC Abe Bonowitz organizes this annual action — Starvin‘ for Justice: The Annual Fast & Vigil to Abolish the Death Penalty — and put out the press releases below. Wish I could be there. Maybe next year will be the last, and a big celebration to mark the end of the death penalty in the US.

WHAT: A four day liquid-only fast and vigil to mark the anniversaries of the historic 1972 Furman and 1976 Gregg Supreme Court decisions on the death penalty.

WHERE: On the sidewalk in front of the United States Supreme Court in Washington, DC

The Annual “Starvin’ for Justice” Fast and Vigil to Abolish the Death Penalty protest is a four day liquid-only fast and vigil to mark the anniversaries of the historical 1972 Furman and 1976 Gregg Supreme Court decisions around the death penalty. Participants in the annual event include exonerated death row prisoners, murder victim family members, death row family members, and various leaders in the national movement to abolish the death penalty.

This year, June 29, 2016 marks the 44th anniversary of the Furman v. Georgia decision in which the U.S. Supreme Court invalidated all death penalty laws in the United States, finding capital punishment to be applied in an arbitrary and capricious manner. July 2nd marks the 40th anniversary of the 1976 Gregg decision, which upheld new state death penalty laws and allowing the resumption of executions. A special rally and media availability will be held at noon on July 2nd to mark these, and other court rulings, as part of the Annual Fast & Vigil to Abolish the Death Penalty at the U.S. Supreme Court.

This is the 23rd consecutive year that the Abolitionist Action Committee will hold its annual Fast and Vigil between the dates of these two landmark decisions. Activists, many of whom are fasting the entire four days, are traveling to Washington D.C. from across the United States and beyond.

We can arrange interviews with activists from your specific state or region. Contact abe@abolition.org or at 800-973-6548 with your request.

The Abolitionist Action Committee is an ad-hoc group of individuals committed to highly visible and effective public education for alternatives to the death penalty through nonviolent direct action.

Below is listed in alphabetical order by date speaking – not necessarily in order of presentations.  All speakers are subject to re-scheduling.  Others may be added.  Programs will start close to 6pm and could go as late as 8:30pm depending on Q&A, musical interludes, last minute weather re-locations into the UMC building, etc.

Join us also for the RALLY/MEDIA EVENT AT NOON on Saturday, July 2, 2016 featuring many of those listed here and more….