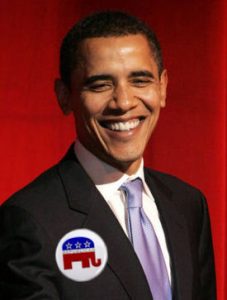 So it hit me last night, while watching The Universe on DVD (as I usually do on weekends) — seeing the (really) big picture has a way of calming the mind and inducing sleep — the solution to a number of serious problems, primarily the governance of this nation, its economic viability going forward, the survival of the middle class, and, not unrelated, the health of the progressive movement and, yes, even the Democratic Party.

Barack Obama should become a Republican. Right away. The sooner the better.

I’m serious! It would certainly solve some of his political problems, the most obvious being the objectionist nature of the GOP — they are repeatedly opposing their own policies of the past, for instance the health care reform bill that passed and ‘cap and trade‘ that hasn’t, for the sole reason that they are being picked up and promoted by a Democrat. Plus, through this pattern of behavior, President Obama is losing the Democratic base in droves with his GOP policies and constant appeasement. Even prominent African Americans are now saying he should be primaried.

But more importantly, the nation could immediately get out of government gridlock and start getting some halfway decent legislation passed, and Democrats could start seriously looking for a candidate that actually believed in their platform to run for president against the current occupant of the WH. Since the half-ass domestic economic policies — not to mention the war on civil liberties and the endless corporatist/imperialist foreign adventures — of President Obama and his GOP friends and colleagues won’t really help the deficit or the joblessness rate, the chances of the Democrats regaining the White House are pretty good.

I’m telling you, it’s the ideal solution to everything that’s wrong with this country.