Most of the world was moved by Tank Man, the unknown rebel to the Chinese government’s violent crackdown on the student democracy movement in Tienanmen Square during the Spring of 1989.

But I was moved intensely enough write a poem that those who have seen my small body of work say is probably the best I’ve written. Anyway, I really identified with the man, since I was working then (much as now) as virtually a full time peace and justice activist. His solitary statement was a symbol of individual resistance, the importance of even just one person making a stand for what is right.

Today is the 20th anniversary of Tank Man’s stand. In some ways, it seems to me like much longer, but I also feel like it was not but a year or two ago. Most of those 20 years have not been particularly productive ones for me — but that’s another post. It’s a time to remember, and to be grateful that democracy continues to be sought and practiced more and more around the world, however imperfectly. Some of the students who were at Tienanmen Square 20 years ago even say that China itself has become better (an article in today’s Oklahoman quotes a man who now teaches as OSU), though there are many who would argue with that. There are protests taking place in cities around the world, to call for real change for the people in China.

The fact that China has blocked a lot of internet sites for the past week or so doesn’t indicate much improvement to me — except for the fact that the intrinsically democratic medium of the Internet is a bloody headache for tyrants to control. In my opinion, if the US really wanted to spread democracy around the globe, they would make broadband freely available via satellites to every spot on the globe.

Images of Tank Man are continuing to be newly revealed — enhancing our understanding of that moment — and art created. Because passion for and commitment to love, peace and human rights will always inspire.

So here’s my little contribution to the genre. I have only altered it from the version I produced in a few hours 20 years ago in that I removed Roman numerals over each stanza, which I now do not know why I thought was a good idea. It was previously published in the Palmetto Post, a newspaper of the Florida Green Party. 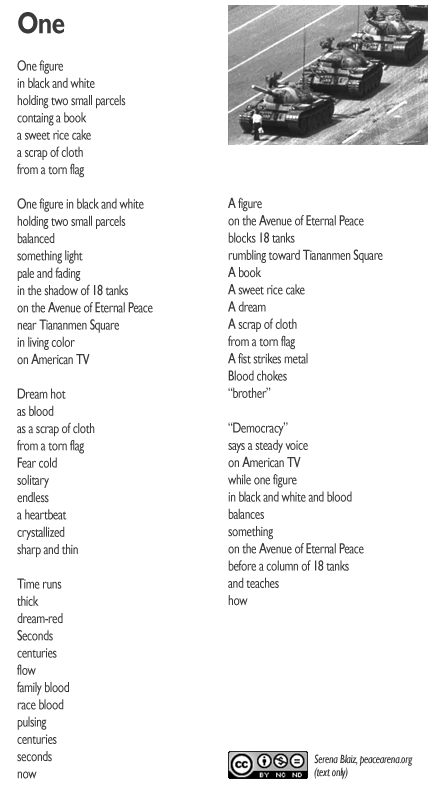 (I’ve posted the poem as an image, because I have not figured out yet how I want to publish my poetry, if at all, and would like to lessen the chance of it being used until that time. I would ask that if you want to share it, that you link to this post rather than download the image. Contact me for other arrangements. Thanks.)