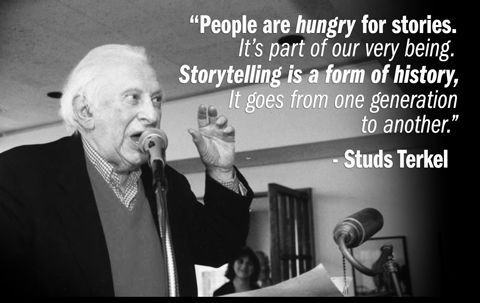 Just by chance today I caught This American Life program on NPR when they were noting the recent passing of Studs Terkel by playing a few of the pieces from his radio series, Hard Times, which was recordings of folks who lived through the depression. The TAL retrospective focused on 1971 recordings from a mother and daughter, Mary Owsley and Peggy Terry, who lived in Oklahoma City from around 1931 till 1936.

I was literally leaning over the car radio and barely able to do my errands while listening, frustrated when I had to leave the car. So I am overjoyed to have found the full (?) Hard Times interviews with Mary and Peggy, and many others, on studsterkel.org. Bless the Internet!

Terkel interviewed hundreds of people across the United States for his book on the Great Depression of the 1930s. In 1973, he selected several interviews that were included in his book to be broadcast in eleven parts on the Studs Terkel Program on WFMT radio (Chicago, IL). This gallery includes the interviews in those programs.

Terkel questions people about their recollections of employment problems, the crash of 1929, organized labor issues, “farm holidays” where crops were destroyed, and U.S. President Franklin Delano Roosevelt’s New Deal programs. He asks them how they managed financially and personally through the economic slump and what personal qualities surfaced as a result. In particular he seems interested in exploring the relationship between their personal plight and values and their awareness of national issues and society’s values.

Mary’s husband was a bonus marcher in 1931, and from what she says about him, he suffered from what we now call PTSD from being a machine gunner in WWI. She explained that there was a big oil boom in Oklahoma in the 20’s, bringing folks from all over to work. Then the crash came and depression went on and on as Hoover did nothing. The suffering was just horrendous, and these interviews really give the listener a sense of what it was like for the migrants, the homeless, the hungry children.

Mary and Peggy talk about not just poverty and hunger, but their personal feelings about despair, economic injustice, and racism. Their stories are so compelling and demonstrate why Studs Terkel, who understood their value and was so skilled at these kind of interviews, received the acclaim he did, in life as well as death.

But the stories are most inspiring because of the examples of kindness and community spirit that were so often found with, or maybe because of, the overwhelming want. Peggy says that there was a community garden in OKC where the residents of a Hooverville grew fresh food. And some of the better off people did share what they could. Mary tells how a black family gave them a ride, and, since they could not eat in restaurants because of Jim Crow laws, they brought food with them, stopping to prepare and eat it. When Mary describes that meal that was shared with her, you can still hear how fondly she remembers it, how good the chicken, sweet potatoes and biscuits tasted.

You know people talk with tangents that are sometimes more interesting that their main point, and in one such aside, Mary tells of being in Montgomery, Alabama, during the bus boycott, and seeing Martin Luther King Jr. being beaten on the sidewalk near the jail. This episode isn’t depression era, but helps to give you an even broader sense of her fascinating life.

Peggy (the daughter) at one point makes one of the most moving cases against racism I’ve ever heard, while recounting her own transformation in thinking about blacks.

And she talks about how much she identified with the epic story of noble migrants, The Grapes of Wrath.

… just like my life. I never was so proud of poor people before … Just reading that book has made me a better person. I think that’s the worst thing our system does to people is to take away their pride, and it prevents them from being a human being. And they’re wondering why Harlem and why Detroit and they’re talking about troops and ‘law and order.’ You’ll get law and order in this country when people are allowed to be decent human beings and be able to walk in dignity…

Well, I could go on and on, but your time would be better spent listening to the recordings yourself. The Hard Times page has many I’ll explore later, but here are the ones of Mary Owsley and Peggy Terry (they aren’t in order on the page like they are here):

Update: The files listed above are in .rm format. Real Media Player is the native software for that type, but I recommend the VLC Player, which will play most any media you ask it to. It’s free, open-source software you can find here.

Update 2 (14 July 2016): Apparently the Studs Terkel archive is in a process of transition and the files I list above are not available, but at some point likely will be again, but at a different URL. In the meantime, here is the 7 Nov 2008 episode of The American Life that I actually heard.