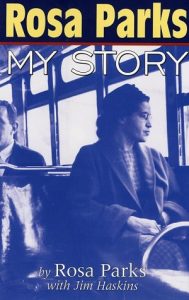 I came across an interesting “diary” blog post at Booman Tribune, one of the sites I read daily, about a memory Rosa Parks recalled of an experience she had at about age 6. It’s on page 2 of her autobiography (Rosa Parks: My Story), so you can deduce the import it had for her.

“One of my earliest memories of childhood is hearing my family talk about the remarkable time that a white man treated me like a regular little girl, not a little black girl. It was right after World War I, around 1919. I was five or six years old. Moses Hudson, the owner of the plantation next to our land in Pine Level, Alabama, came out from the city of Montgomery to visit and stopped by the house. Moses Hudson had his son-in-law with him, a soldier from the North They stopped in to visit my family. We southerners called all northerners Yankees in those days. The Yankee soldier patted me on the head and said I was such a cute little girl. Later that evening my family talked about how the Yankee soldier had treated me like I was just another little girl, not a little black girl. In those days in the South white people didn’t treat little black children the same as little white children. And old Mose Hudson was very uncomfortable about the way the Yankee soldier treated me. Grandfather said he saw old Mose Hudson’s face turn red as a coal of fire. Grandfather laughed and laughed.”

Just in case it’s not clear to the reader what this story has to do with Mrs. Parks’ arrest in December 1955, she explains: “There had been a few times in my life when I had been treated by white people like a regular person, so I knew what that felt like. It was time that other white people started treating me that way.”

I have not yet read this book, so this particular reflection by Ms. Parks is new to me. But I completely understand how something that happens to you at 6 can be one of the most critical moments in your life (go read the diary to understand the point of my title here, “dangerous memories”). Here’s my comment to the post which hopefully explains how I can say I know that for sure:

This story is particularly interesting to me. When I was in the first grade, in 1959 southern Georgia, and just starting to learn to read and write, I went to a friend’s house to play and took up a blackboard to show off my new skills. I tried to write a sentence with the word “air” in it, but I didn’t know how to spell it. The only adult in the house was the black maid of my friend’s family. So I asked her how to spell “air.”

I remember distinctly that she was ironing sheets at the time — white sheets, ironically (all sheets were white and flat back in those prehistoric days) — I remember it because we didn’t iron sheets at my house (but then, we didn’t have a maid).

Anyway, I went up to this woman and asked her, “how do you spell ‘air’?” I didn’t think anything of it, I had asked such questions of all the adults in my life and been given unremarkable but satisfactory answers. But this woman paused and looked at me with a look I can’t describe, I think it must have contained both shame and anger, and said, “I don’t know how.”

Although I had never consciously considered the racist culture around me before, in that look and statement, I was stunned into an awareness of it. I knew without a second’s thought that the reason she didn’t know was that she didn’t know as much reading and writing as I knew halfway through the first grade, and I knew the reason for that was because of the color of her skin.

I don’t remember a lot of my childhood, which was not a very good one, but I have always remembered this incident. I’ve been a activist for peace and social justice practically all my adult life, and I see that moment as the start of that process. So I know exactly what Rosa Parks is talking about here. Sometimes it only takes a second for your whole life to be set in motion.

It’s kind of crazy that I clicked over to read this diary at all and found this treasure, because I actually never read the member diaries at Booman Tribune, just the front pagers. Any member can post a diary, and such diaries that are recommended by other site members are listed in the sidebar, and I rarely notice them, much less click the links. But this diary was authored by user “massappeal” and I took a couple of writing classes with the playwright who wrote a play called Mass Appeal that was made into a film starring Jack Lemon (one of my meager claims to fame, LOL). I had kind of schoolgirl crush on him. So I thought, hmmm, could it be …? Probably not (though the Catholic theology thrown casually into the diary suggests a remaining chance), but I got something good out of that click anyway. Life is funny that way.

There are (so far) two other diaries posted by massappeal that also look at some of Rosa Parks’ history from the book.